It was a beautiful day, the sun was streaming through the trees, the birds were cheeping, what a gorgeous day for an adventure. The children were happy, excited and raring to get going on their pirate treasure trail.

What child doesn’t like a treasure hunt and to be honest, what adult could resist one too? We discovered you can buy treasure trails for various parts of the country. You download a map and instructions with clues for you to follow. We chose a trail in Burley about a pirate who lost his buried treasure. We had to follow the clues to find the treasure location, before he woke up from his sleep. 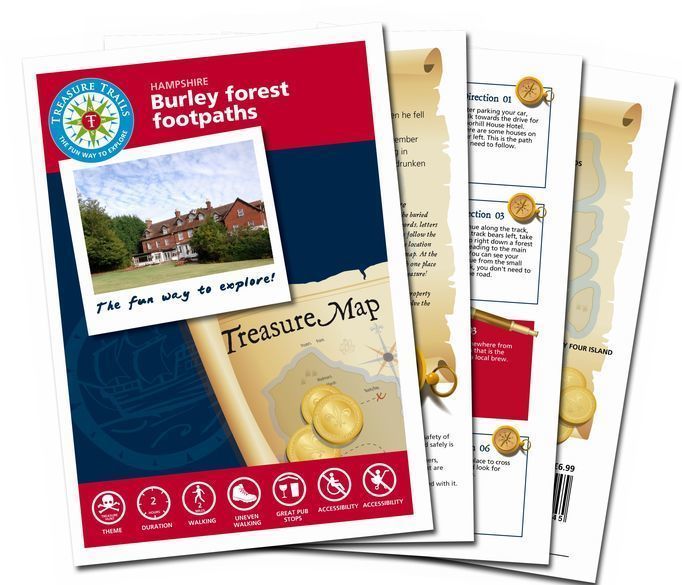 The children couldn’t wait to get started, we were off on a pirate adventure. Hugging their maps, shouting arrrgh me hearties, they headed through the trees in search of their first location. We found it quite easily, which of course excited the children.

The next clue was read and we were off again, on a mission. We headed along a path, through the trees, over mounds finding adventure everywhere we went. The children came up with all sorts of adventures en route, trying to stay quiet so we didn’t wake the sleeping pirate. However, I must confess, they found that a little tricky, as my children are never quiet. We saw pirate ships, treasure islands and many scallywags on our travels. The children’s imaginations came alive.

A few more clues were found and decisions had to be made which way to go. At times this was quite a debate.

We walked through woods and along paths, which quickly became swamps with crocodiles in. We strolled along country lanes, passing many pirate ships.

Treasure was found along the way, in many different forms, from sticks and leaves to the most enormous pinecones I have ever seen.

We crossed bridges with trolls under, though what trolls have to do with pirates, I have no idea. The children enjoyed reading the clues and trying to work them out, though I must admit my children were a little young for the clues, but it really didn’t affect their enjoyment of their pirate adventure.

By the end of the trail we found the location of the buried treasure, even though we actually didn’t manage to complete all the clues along the way and according to the children, we achieved it before the sleeping pirate woke up. Wow, what an adventure. Look how much fun you can have when you step inside a child’s imagination.