Beach adventures equal lots, lots, lots of shells! Oh how children love collecting them. The excitement at every broken, misshapen shell found, is overwhelming at times. Hence, I think it’s probably fair to say, lots of parents have pots, buckets and drawers full of shells, I know we do.

Now the question is what to do with them? You could make some lovely beach pictures like we did last year. However, we collected so many, we still had loads left. On clearing out the ‘drawers’ last week I found a big stash of them. I decided to give them to the children with a selection of crafting supplies, to see what they would come up with. 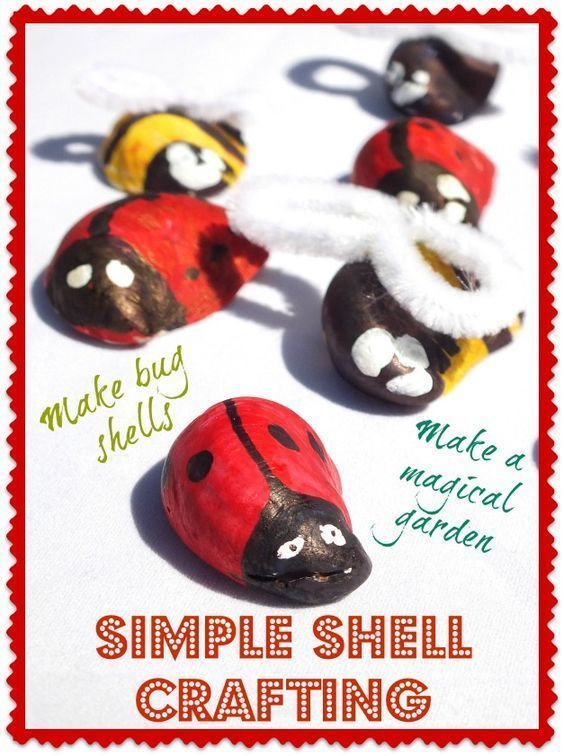 First up the children made bug shells…

Using permanent markers they coloured the shells in red, then added the black head and dots to make a ladybird. They used tippex for the eyes.

This was so simple and they looked so cute that Boo decided to make a whole family of ladybirds.

Next were bees, colouring the shell in yellow and adding black stripes made it very effective, but then how to add the wings? They bent pipe cleaners and glued them on top. I love them!

BB also made a tortoise and a fly.

After making lots of bug shells it was time to give them a home, so a magical garden was needed the next day.

It was such a gorgeous sunny day, we took everything outside and let imaginations come to life. All it took was a box and crafting bits, including glittery, sparkly bits of course. Simple shell crafting outdoors

I think almost every craft supply I have was added to their magical gardens, from cutting up pipe cleaners for the bugs food, to glitter, pom poms and beads.

I have absolutely no idea what these things represent, but it doesn’t matter, the children created their world. In their mind it’s a truly magical garden, which BB says he’s going to write a story about. I love how doing one thing can spiral a child’s creativity into lots of different directions.

Everyone had a lovely time getting creative with their shells and crafting supplies and I’m very pleased to say, most of the shells have been used up… that is, until our next beach adventure 😉