I have heard a lot about ‘The Look Out’ discovery centre in Bracknell from friends, but up until now, we have never had the opportunity to visit. Last weekend was daddy’s birthday and we wanted a family day out, so we headed to The Look Out. I am so glad we did, it was fantastic! 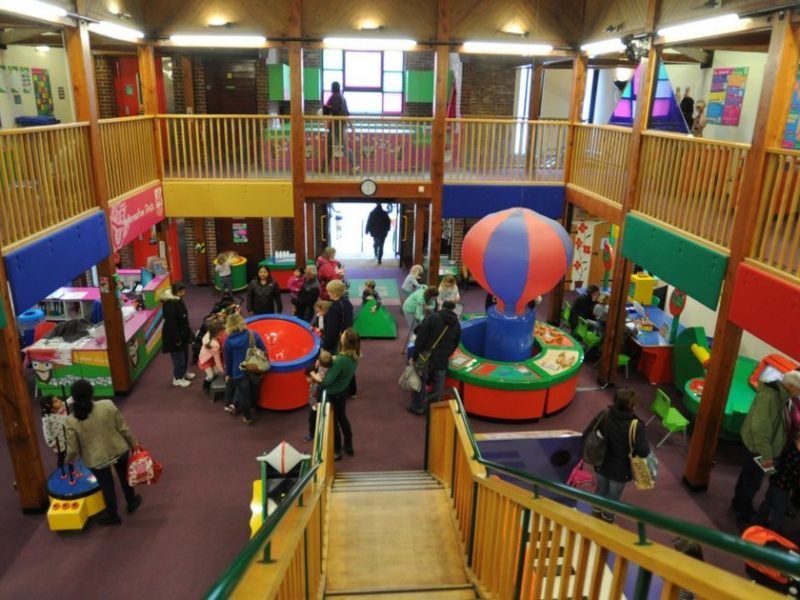 First up was the wonderful playground. There were three sections of playgrounds for different ages which has to be a good thing. The children all enjoyed the climbing, the bouncing, sliding and running around. All three of them went down the fireman’s pole by themselves, which they were very pleased with and they also had a great time banging the drums together.

The kids were having so much fun in the playground, it took a bit of persuading to pull them away, but eventually we went inside the discovery centre and we are so glad we did. First of all we went to a space talk which was aimed at 3-7 year olds, perfect for us. We all sat inside an inflated dome tent where a projector displayed lots of images of the planets, stars etc. It was a very interactive talk and Pinky and Boo enjoyed pretending to put their space suit on. They all loved hearing about space and the bear story. I think I learnt a few things too 😉

After the space stories we had a quick look around the centre. It is divided up into six zones, woodland and water, forces and movement, build it, light and colour, body and perception and the lookout tower.

My kids were immediately drawn to the build it zone. They absolutely loved it!! There was a house that needed building. The children dressed in their high visibility jackets and got building with giant Lego! They built walls, houses, they added tiles to the roof, drove around some diggers and pushed around wheel barrows.

I think daddy enjoyed it just as much as the children, I think I have an extra child sometimes ;). Pinky was very pleased with the house she built with daddy. They would have spent the whole day just in that zone. I had real trouble persuading them to come and have lunch and if you know my children, who want food all the time, you’ll realise just how much fun they were having!

After lunch, we decided to go for a walk in the forest. It was lovely and peaceful, beautiful and fun all in one. There were loads of logs all ready prepared for us to make a den. The children had a go by collecting the logs and placing them round a tree, then got in and BB tried to make a fire by rubbing two sticks together. Don’t worry I would never have actually let him succeed in this, he was just pretending!

We wandered into the forest, walking on logs, running down hills, investigating and exploring anything interesting, like other people’s dens, mushrooms, sticks, leaves, trees and horse chestnuts.

Then of course came the obligatory tree climbing fun. It was such a fab tree for climbing, they all managed to get up there together. We played on that tree for ages! “This is the best playground mummy” one of them said! I love it!

Once we could drag the kids away from the trees we headed back to the discovery centre to have a look at what else there was to see. They investigated some water, electricity, the human body, music and many other things, too many to mention.

There was so much to learn and have fun investigating, in a hands on way. We will definitely love to come back!

We paid 4 pound for parking all day. You could just go in the forest and use the playground if you wanted to. To go inside The look out discovery centre it costs 19.05 pound for a family of four, I thought this was reasonable. There is also a Go ape centre there if you are feeling like a challenge or bike hire.

It was a fantastic day out, I am looking forward to being able to return!

6 thoughts on “The Look Out Discovery Centre”